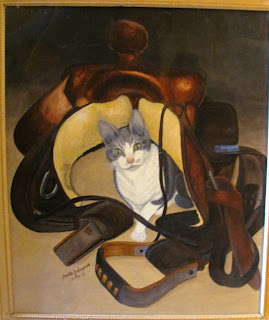 My first acrylic painting from late 90's, always an oil painter prior to discovering acrylics.
This painting along with 9 other paintings by me, were on display at the Columbia County Court House through December 2016.

Posted by Loretta Sampson at 9:04 AM No comments:

Posted by Loretta Sampson at 8:54 AM No comments: 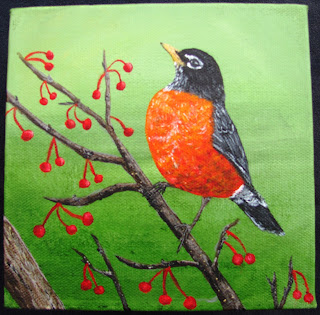 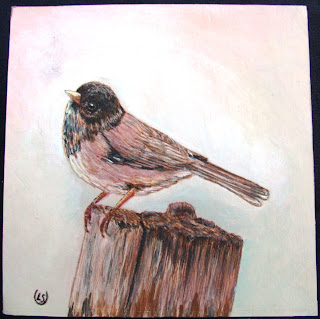 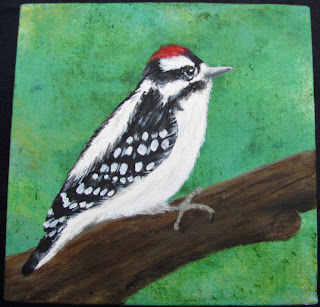 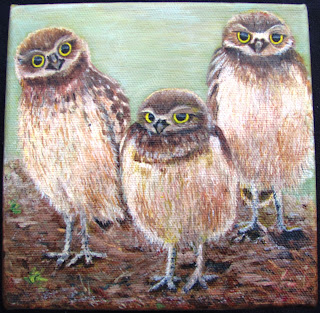 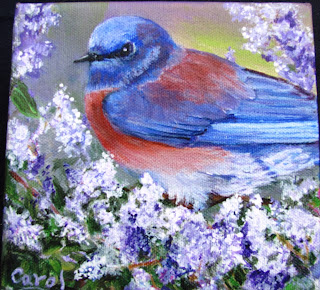 Posted by Loretta Sampson at 8:51 AM No comments:

Labels: all are Acrylic on canvas., then painted in acrylics, which was burned in leather, with the exceptions of mine 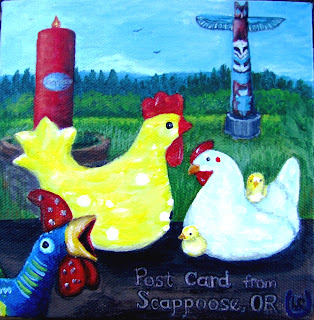 visits the traveling chicken to see where Ms Chick and her entourage are now.

Posted by Loretta Sampson at 8:39 AM No comments: 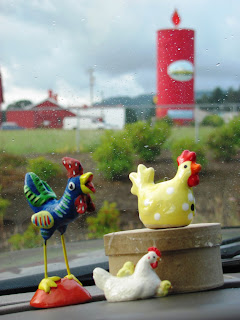 The Peace Candle, worlds tallest candle dedicated on Mother's Day in 1971 and again in its current state in 1997.  In 1971, it was covered in all colors of actual candle wax with large drips melted down the sides and it had an eternal flame.  The wax didn't fare well during the hot sun and the forever flame was too expensive.  Since then, the candle was covered in fiberglas, painted and has a neon flame. 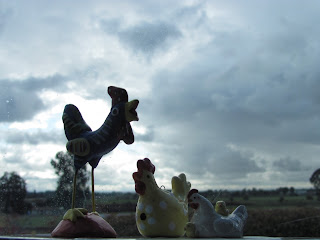 Ms Chick arrived during stormy weather with short breaks in the clouds and down pours.  On a clear day, Mt Hood would be in the background here.  The group were not interested in spending time outside in the rain. 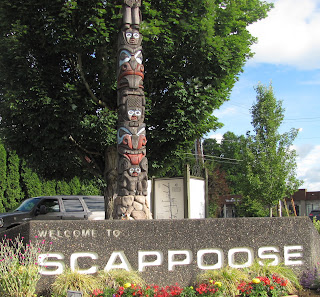 Ms Chick and friends are on the welcome sign at the base of the totem pole...really.
Scappoose's native American meaning is: "gravelly plains or gravelly ground" 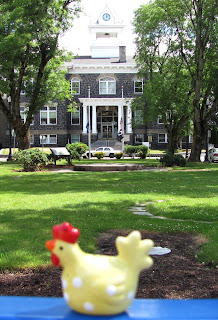 The Columbia County Courthouse in St. Helens, Oregon, where part of Halloween town was filmed and some of the Twilight sagas.  Every year during October, the courtyard becomes Halloween town complete with the giant pumpkin. 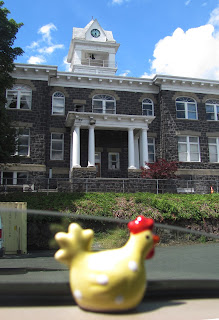 The Court house as viewed from the Columbia River side. Two fronts. 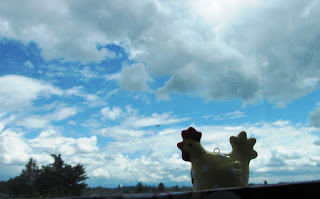 Days later, This was the best we could do to see Mt Hood during Ms Chick's visit.  It's in the distance behind the clouds.  She has stayed as long as she could, it's time for her to visit other wonderful places. 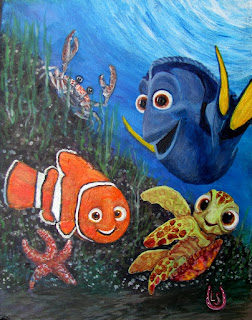 As a favor to my sister, I painted my rendition of some favorite Disney Characters
(NFS)
Posted by Loretta Sampson at 11:10 AM No comments:

Labels: 8x10 acrylic on panel board 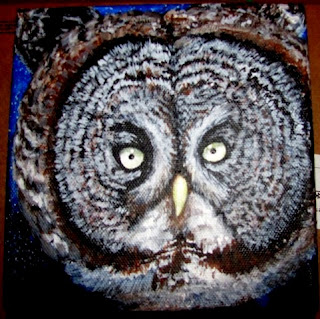 "Errol"
My submission to the Wild Arts Festival Nov. 21st-22nd 2015.
Errol is a Great Grey Owl.
After a long Hot summer recovering from a broken arm and leg resulting from a car accident on May 15th, this was my first painting since the Red Trucks.
Yes....it was my painting arm. 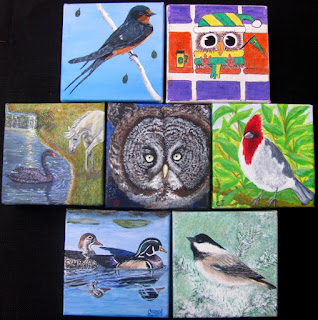 Posted by Loretta Sampson at 12:47 PM No comments:

Loretta Sampson
I love painting, drawing and making art. As well as a painter, I am a Western tack and; saddle maker. My favorite subjects to paint are ususally something with animals and mountains, trucks and old buildings. I enjoy painting on saw blades as well as canvas. I enjoy refurbishing old saddles and completing all types of saddle repairs.